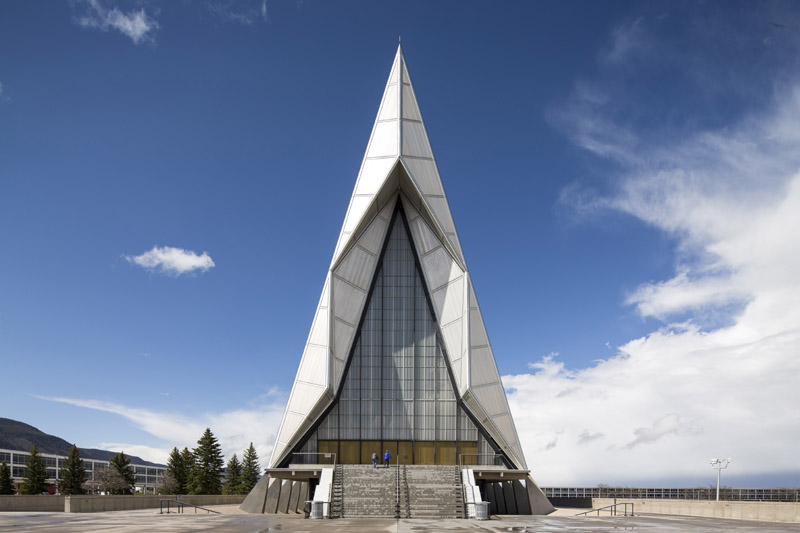 Where exactly is the edge of possibility, and how does anyone ever breakthrough? Famed flying ace and former United States Air Force officer, Chuck Yeager, is one name closely associated with pushing the envelope. Yeager was the first person to have exceeded the speed of sound, pushing an aircraft beyond the sound barrier at some 765 miles an hour in level flight as a test pilot in 1947. The ‘envelope’ is a mathematical term that describes the locus of the ultimate intersection of consecutive curves. In aviation, the frank explanation for pushing the envelope is making an aircraft go faster than the speed for which it was designed. Pushing the envelope in architecture would then logically be to rethink what is possible and ask more of design than ever before.

Walter Netsch was just such a thinker. A leading figure in modern American architecture, throughout his tenure at Skidmore, Owings & Merrill and beyond, Netsch developed a signature aesthetic known as Field Theory based on rotating squares to derive complex, strong, repeatable shapes. His most well-known work is the United States Air Force Academy, in Colorado Spring; most famously the iconic Cadet Chapel. Here, in every sense of the term, pushing the envelope was clearly Netsch’s intention.

“Walter was trying to push the limits of technology in architecture and trying also very much trying to push the envelope on people’s expectations for what a religious facility might be,” says Duane Boyle, the Air Force Academy’s Campus Architect. Boyle has been at the helm since the early 1980s in dutiful service to the campus he’s been chosen to protect. Having studied at Air Force Academy High School in the 1970s, Boyle shares that being exposed to the campus’ architecture during his maturation is primarily what influenced him to become an architect. After earning a bachelor’s and master’s from CU Boulder, Boyle took a position at SOM and got to know Netsch personally. A few years later, he signed on with the Academy and has never considered doing anything else.

“Walter went to Europe and studied many different cathedrals, ultimately finding significant influence in four key structures,” says Boyle. “From Chartres, he was inspired by the flying buttresses; at Notre Dame, the 150-foot height; the beautiful quality of light from Sainte-Chapelle; and the idea of having more than one chapel in the building comes from Assisi.”

Combining all these ideas with his own unique design style, Netsch conceived the Cadet Chapel as a series of spires comprised of three-dimensional tetrahedron trusses. The aluminum and glass spires are composed of four tetrahedrons apiece and straddle a building program that originally required three distinct chapels for Protestant, Catholic, and Jewish faiths.

“The original plan called for 21 spires, but that was going to be way over budget and the design was scaled back to 17 spires,” continues Boyle. After he’d hired on at the Academy, Boyle’s bond with Netsch grew even stronger, the two remaining in close contact throughout the remainder of Netsch’s life. Professional necessity often permeated their conversations as Boyle was charged with caring for the assets Netsch designed, especially the one that had pushed the envelope. Netsch’s design for the Cadet Chapel was challenging to build in the early 1960s and challenging to maintain ever since.

“There are 32 miles of joints on the building,” says Boyle of the Chapel’s many overlapping materials and components. “Netsch designed the Chapel with an internal flashing behind the aluminum skin that was meant to carry water off the building. Ultimately, all of the metal panels were value-engineered out, and they ended up using 32 miles of caulk to seal the joints.”

As a result, the Chapel has been leaking since virtually the day it opened in 1962. The near-constant seepage has destroyed pews, damaged organs, and, in recent years, caused chunks of damp acoustic plaster to fall from the ceiling, a safety hazard that can’t go unabated. Thin sheet metal band-aids have been applied over the years to some benefit. Wired glass installed over the stained-glass panels helped as well but diminished luminosity. However, despite their efforts, the building has been in a constant state of re-caulking since it opened. Unchanged, the deterioration will continue.

Sean Reish, client account manager for AECOM’s design contract with the Air Force Academy, is charged with leading the development of solutions to the building’s condition. In taking the assignment, AECOM assembled a multi-faceted team of engineering and preservation experts to look holistically at the waterproofing and historic preservation conditions and devise an achievable solution. Key contributors included Hartman-Cox Architects and Wiss, Janney, Elstner Associates.

“Conceptually, this is a replacement-in-kind,” says Reish of the scope of work, which includes replacing the exterior façade’s skin and sloped glazing and restoring the stained-glass panels to their intended brilliance. Interior efforts include replacing the acoustic plaster and lighting elements and renovating damaged pews and organs.

“The design team had to look closely at what was originally intended that had been covered up to make it watertight,” continues Reish. “A lot of translucency had been lost. Our objective was to peel back these negatives and bring the building back to life the way it was intended to be seen.”

The solution to the water infiltration: using the open volumes of space within the tetrahedron spires to insert a new state-of-the-art rain screen system.

“The spires have a lot of open space inside of them, much more than you’d think,” says Reish of the idea to put the Chapel’s primary waterproofing membrane on the inside of the tetrahedrons. “By introducing a new rain screen inside the spires, the exterior cladding will finally look as it was meant to.”

The challenges of delivering the project are also immense. Donny Tennyson is the Senior Project Manager at General Contractor, JE Dunn Construction, the firm responsible for executing the elaborate rehabilitation. Founded in 1924, JE Dunn has a long history of collaboration with the U.S. Armed Forces. Tennyson shares that during World War II, founder John Ernest Dunn insisted on returning profits from Federal work while his own sons served overseas. Community service and giving back has always been part of the company’s ethos. Asked how success will be measured on such a challenging assignment, Tennyson returns to collaboration.

“During the construction kick-off we came together with the client and design resources to draft a project mission statement,” says Tennyson. “Our goal is to return this iconic building to the intended historic aesthetics and integrity without any leaks.”

One of the key issues yet to be fully resolved revolves around the challenge of precisely matching the building’s unusual aluminum skin with identical materials. AECOM, JE Dunn, and almost the whole team have been painstakingly researching the existing aluminum’s metallurgy tolerances and anodizing results to replicate the Chapel aluminum’s particular champagne glimmer. To execute the project, JE Dunn’s site logistics strategy is to build a temporary enclosure around the entire chapel, sealing it off from wind, rain, and snow. This will allow the construction team to control the elements and maintain an uninterrupted workflow. Much of the rehabilitation effort, particularly resealing the joints between aluminum panels will benefit from working in near factory conditions.

“Everyone working on this project understands the importance of this national treasure and the delicate work that must be done to restore it,” finishes Boyle proudly. “As stewards of this building, we must do the very best work we can. When this project is complete, the Chapel will look exactly like it was intended with no more band-aids.”