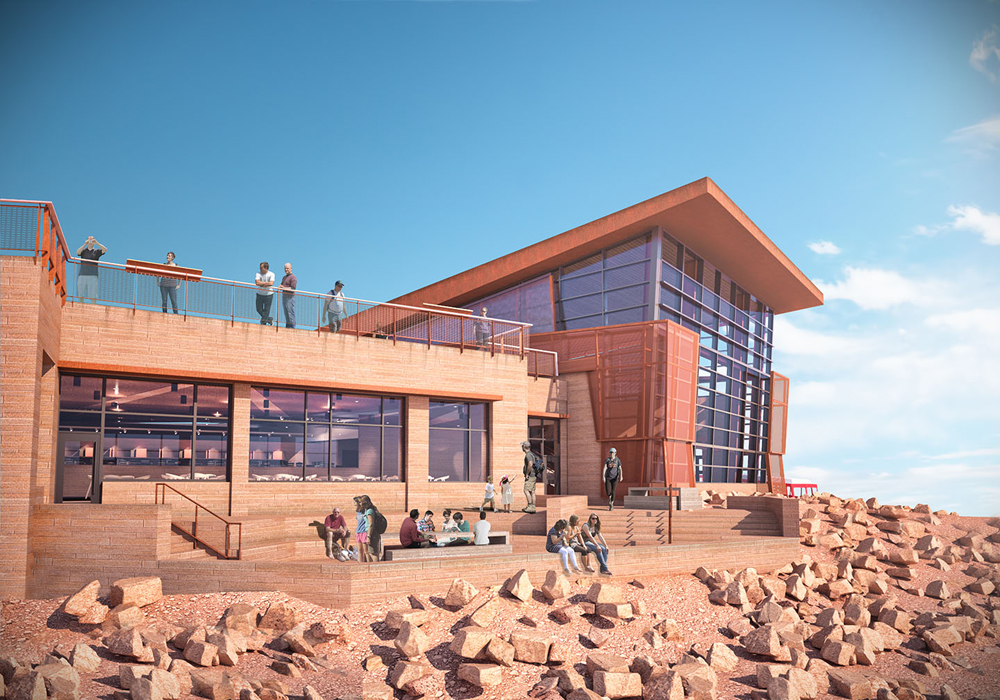 above the fruited plain, a national inspiration deserves celebration

Rising majestically over Colorado Springs, Pikes Peak is a cherished emblem of the city, a point of pride for residents, and a virtually must-see tourist stop for anyone visiting the region. The summit is reached by a 19-mile toll-road that was built in 1888 and it’s one of only a few vehicle-accessible places in the world where anyone of any age or disability can see the world from 14,000 feet. One hundred and thirty-one years after the highway first opened, in 2019 through the end of September America’s Mountain had received 527,696 visitors and counting. The City of Colorado Springs took over ownership of the two-lane highway in 1948 under an operating permit issued by the U.S. Forest Service and today manages the route and facilities. As the highway’s year-over-year use continues to grow, the City strives to provide an outstanding experience for everyone who makes the trip.

“Pikes Peak is a national treasure and has been since Zebulon Pike spotted it in 1806,” says Jack Glavan proudly. Glavan is the manager of Pikes Peak – America’s Mountain, a division of the City of Colorado Springs Department of Parks and Recreation. He has been involved in maintaining the highway and supporting facilities for nearly 25 years. In the early part of his career, as a construction project specialist, Glavan helped lead critical highway maintenance projects around erosion control, paving, and improving sediment channels and basins. In the ten years since becoming manager, largely the focus has been the new Pikes Peak Summit Complex.

Developed through a multi-faceted partnership between the City of Colorado Springs, the U.S. Forest Service, the U.S. Army Research Institute of Environmental Medicine and Colorado Springs Utilities, the new Summit Complex replaces a collection of existing facilities that have succumbed to the effects of time and the mountain’s harsh weather. The need to replace outdated, difficult to maintain facilities and the desire to significantly enhance the visitor experience first prompted consideration in the late 1990s, as Glavan recalls. The plan was revitalized in 2013 and after years of planning, the visitor center project finally broke ground in June 2018. The new complex is composed of the new Summit Visitor Center, which includes a CSU Communications Facility and a consolidated physical plant and the visually contiguous the Army High-Altitude Research Laboratory. Construction for the overall program is expected to take three years to complete.

“When the new visitor center opens in late 2020, this will be an outstanding experience at 14,000 feet,” continues Glavan of the 38,000-SF precast concrete structure. “The program includes interpretive areas, dining, retail, much larger restrooms, but, of course, the main features will still be the views and the world-famous Pikes Peak doughnuts.”

Stretching as far as the eye can see, the view is indeed inspiring. In 1893, American writer Katharine Lee Bates started forming the words to America the Beautiful from atop Pikes Peak; later writing the first version of the poem back in her hotel room in Colorado Springs. The doughnuts are delicious too, but only atop the peak; taken to a lower elevation, their light dough changes in composition and taste.

“Very early on, we realized how special the site was,” says design team leader, Stuart Coppedge, of Architect-of-Record RTA Architects of Colorado Springs. RTA was joined by GWWO Architects of Baltimore, a firm with a strong portfolio of cultural, interpretive, and experientially centric projects in designing the Visitor Center. “This project wasn’t about designing an iconic building but designing an iconic experience.”

From above the fruited plain, the new Visitor Center is sited along the southeastern face of Pikes Peak, wedged into the mountainside to peer over all that surrounds. Long views to the southeast look back toward the route Zebulon Pike traversed on his expedition through the southwestern fringe of the Louisiana Purchase – from the distant peak of Mt. Rosa and up the Arkansas River. Today, visitors regularly arrive at the peak by car, bus, bike, or foot; and by rail again soon when the Pikes Peak Cog Railway reopens in 2021.

“In any space where you have a large number of visitors, the first objective is to disperse them,” says Coppedge of the design’s functional driver. “To do this you give them many choices right at the beginning; here crowds can either head into the Visitor Center or go straight to the actual summit or various views from the peak on a fully accessible route. No matter their fitness level, anyone can tour the entire top of the mountain on easily navigated, well-defined paths.”

On a site that hosts almost three-quarters of a million visitors a year yet is fundamentally off-grid, practical sustainability is essential to long-term operational success. The Summit Complex was designed to meet The Living Building Challenge; a sustainable design framework focused on regenerative, self-sufficient, healthy spaces. Building orientation takes advantage of enhanced solar gain to trap heat and harvest daylight. Only the second property in Colorado approved to treat blackwater onsite, wastewater from the Summit Complex will be treated and recycled to flush toilets in a closed loop. Importantly, blackwater reuse significantly reduces the amount of water that must be hauled up the mountain and the amount of sewage that must be hauled down.

Both the Visitor Center and the High-Altitude Research Laboratory are largely constructed of precast concrete walls, floors, and roof. The insulated panels are among the thickest ever made. Building a primarily precast structure allowed offsite prefabrication in a controlled setting but also meant trucking the materials up the steep mountain highway. Panels were specifically designed to be no more than 30 feet long and 8 feet wide, no heavier than 30,000 pounds apiece. The upper level of the Visitor Center also incorporates a steel frame to allow for the largest views along the glass-curtain wall.

“We did quite a lot of research on glazing that can stand up to this environment,” says Coppedge. “Our design wind speed is a three-second gust of almost 200 miles an hour, basically hurricane tested. We also studied the angle of the glazing closely to minimize glint. We didn’t want to create a big shiny spot on the mountain.”

Protecting the investment wasn’t lost on designers either. The glazing will be subjected to a constant scouring of wind-blown sand and gravel, scratching across the surface. A shutter system was developed to cover the glass at night and when the wind forecasts indicate the need.

The team building it all is led by GE Johnson Construction Company, a Colorado Springs proud business of more than 50 years. After GE Johnson and the RTA/GWWO team were united by the City of Colorado Springs to deliver the visitor center project under a CM/GC contract, GE Johnson and RTA Architects pursued and secured a Design-Build contract with the U.S. Army Corps of Engineers to build the immediately adjacent, but functionally independent High Attitude Research Laboratory for the Army. Construction Manager Tim Redfern is in his 34th year with GE Johnson so he appreciates the once-in-a-lifetime nature of the Summit Complex and the honor of leading the construction effort.

“This is the kind of job, we’ll all be proud to tell our grandkids about,” says Redfern of the immense challenge of building at 14,000 feet. “It’s an extremely difficult environment to build in for a lot of reasons; physically taxing, slow work but incredibly rewarding day-by-day.”

At 14,000 feet, significantly lower atmospheric pressure means the air has 43% less effective oxygen than air at sea level, which is difficult for people, heavy equipment operations, even fuel consumption. To account for the impacts of altitude and the environment on the men, machinery, and time, GE Johnson initially de-rated productivity by 25 percent in their critical path scheduling. After a year and a half since starting the work in July of 2018, Redfern says devaluing manpower by 60 – 70 percent and all running equipment by 50 percent is more realistic.

As the work has progressed thus far, GE Johnson has blasted and excavated roughly 33,000 cubic yards of rock from the top of the mountain to deep set the building into the peak. Much of the blasted rock was crushed and stored onsite for reuse as backfill around the completed buildings. On November 12, 2019, GE Johnson and the team celebrated the project’s topping out, placing the highest beam of steel on the Summit House, as this decade’s long dream finally starts to see the finish line.

“Coming into this winter, we’ve been very successful in completing foundations, roofing, all the precast on both buildings, and getting the Summit House dried in with temp heat,” says Redfern of his team’s approach to the project’s summit. “When we started, crews were only able to go about six hours at a time. People are acclimated to it now and crews are working ten-hour days. Everyone has stepped up because these buildings, this mountain, and its history are worthy of the effort.”