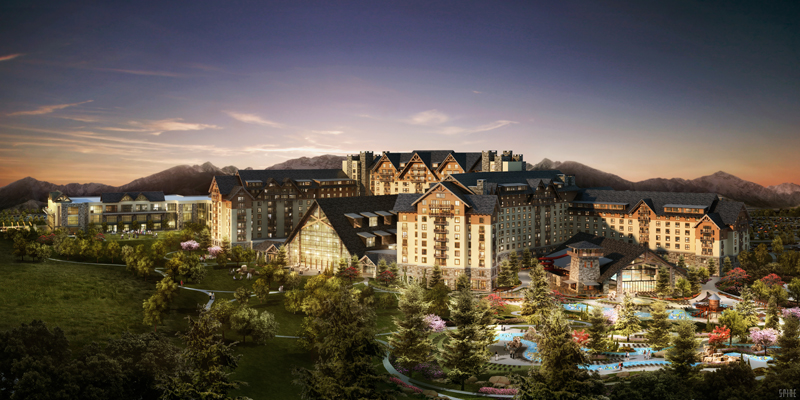 from scope to scale to magnificent detail, the Gaylord Rockies Resort & Convention Center stretches the imagination

Over a 27-year career with national construction powerhouse Mortenson, Brett Sisco has seen a lot of change, learned a lesson or two, and put together an impressive collection of buildings across Colorado. As the project executive overseeing construction for the new Gaylord Rockies Resort & Convention Center, which is expected to open in December 2018, Sisco and his team have their hands full. The massive 1501-room hotel is joined by 485,000 square-feet of convention center space and an extensive indoor/outdoor water park on a sprawling 85-acre site, just south of Denver International Airport.

“This is definitely the largest job most people on this project have or ever will work on,” says Sisco with a great deal of pride. Sisco’s last major project was the DIA Westin. At 519-rooms, the sleek glass hotel linked to the airport above the light rail line was also large and complicated. Yet that’s just a third of the Gaylord Rockies’ room count, with none of the convention spaces or water park features. “There are very few projects bigger than this.”

The scale of the project, of course, necessitates a lot of manpower. 1,600 craft personnel were on site at the project’s peak workforce. A lot of manpower necessitates a lot of manpower management and in order to lead the show, as project executive, Sisco has been working from the job site trailer for approximately 90% of his time since early 2016. Far from the creature comforts and corner office in downtown Denver, out at his trailer compound on the prairie, Sisco’s team includes some 60 supervisory positions drawn from Mortenson and joint-venture construction partner WELBO, of Orlando, FL.

“WELBRO has a more than 20-year relationship with the developer and was asked to come to Colorado to find a partner capable of building something this incredible,” continues Sisco. Project developer, RIDA Development Corporation, originating in Houston, TX, has forty years of experience and is one of the most active conference hotel developers in the U.S. At their behest, WELBRO interviewed a number of possible local partners before selecting Mortenson based on similar cultural compatibilities and corporate values. Joint construction management efforts are divided along a 70/30 local split, but Sisco insists that the management is structured such that you would never know who works for who.

Colorado has long been established as a major tourist draw by the beauty of the Rockies, arid climate, and 300 plus days of sunshine annually. Guest feedback at Gaylord’s four preceding properties in Florida, Texas, Tennessee, and Washington D.C, reveals a Colorado location is something the brand’s patrons have been clamoring for. Denver as a city has always been a convention contender at the mid-size level behind bigger draws like Orlando, Las Vegas, San Diego, and Atlanta. However, since DIA opened in February 1995, the fastest route to the downtown convention center is 25-miles of industrial ugliness that makes the airport feel remote and detached for attendees. The Gaylord Rockies is less than ten minutes from DIA’s curb and offers a unique convention center experience that goes well beyond the boundaries of a typical hotel.

“The design here is a collaboration of architecture, interiors, and landscape architecture in the truest sense,” says Richard Johnston, the design principal for HKS Architects, the firm chosen to lead design services from their Dallas office. Johnston has been in hospitality design for 28 years and is now on his third hotel project with RIDA. He shares that the Gaylord experience is about transfusing a proven convention hospitality design model with regional environmental aesthetics and suggests Colorado certainly offers more than a little inspiration. From the endless views of snowcapped mountains stretching the length of the state to the year-round awesome weather, and rugged material culture, Colorado doesn’t disappoint. The Gaylord Rockies’ façade is designed to imbue a high-alpine aurora, reminiscent of a slope-side mountain lodge with steep-pitched roofs, stout stone base, and stucco surface.

The centerpiece of every Gaylord Hotel is the Grand Atrium, a locality-themed galleria of dining, entertainment, gathering, and retail space surrounded by an outdoors inside environment on an other-worldly scale. In Colorado, a crystal clear cascade of water plunges over a rock walkway into a mountain stream leading to a lake surrounded by hand-made Aspens – real Colorado trees, harvested as juveniles, sprayed with fireproofing, and revegetated with artificial branches and leaves. Life-like grasses, prairie flowers, and succulents fill patches of growth between stone walkways. Warm earth tones, abundant in the wood, rock, and vegetation, blend with southwestern textile and graphic influences to create an energetic, and seemingly organic atmosphere. Views of the Denver skyline in front of the Front Range, are purposefully framed in the grand window. A small ski village, an actual train caboose, a steel-truss bridge, a grand fireplace, and a cave passageway are some of the unique moments that make the Gaylord Rockies a wonderland enticing business travelers to bring the whole family.

With eight food and beverage outlets throughout the facility, there is sure to be more than something for everyone when the family does tag along. Like everything else, the water park is also colossal. The expansive indoor, outdoor aquatic playscape stretches across the southwest corner of the property and includes multiple pools, and water slides, a lazy river, family lagoon, private cabanas, and a Colorado ‘hot springs’ experience with ever-present city and mountain views as the backdrop for a perfect family getaway.

“Construction of any scale is really about the people doing the work,” says Sisco confident in the quality his team is delivering. Mortenson/WELBRO joined HKS and RIDA as the Construction Manager/General Contractor before the end of schematic design, just a month after HKS was selected. This early entry into the project was immensely beneficial over nearly two years of preconstruction services. Integrating the hands-on expertise and technical knowledge of design-assist subcontractors in mechanical, electrical, and structural steel at 60 percent design completion helped increase constructability, efficiency, and value in important systems during design. It also enabled Mortenson/WELBRO to lock-in critical-path subcontractors, which decreased schedule risks during delivery. The team’s estimating group ultimately produced five full-scale construction estimates on route to the Guaranteed Maximum Price (GMP) contract in December 2015. “On a mega-project like this, everyone is super committed and proud because we all know this project is going to have a significant positive impact on the entire region economically.”

Putting 1,600 people into motion simultaneously on scopes spread over nearly 5 million +/- manhours of work is no small task. Account for the critical precision that must be insisted upon around dangerous construction situations and the concept of coordination simply can’t be sufficient to describe the process Sisco and his team are managing.

“From a size and scale perspective, we focused on dividing the project into smaller chunks,” shares Sisco in regard to effectively overseeing the vast multitude of subcontractors, vendors, equipment suppliers, deliveries, and inspections. Mortenson/WELBRO’s execution strategy involved breaking the project into four primary segments – Convention Center; Hotel Room Build-out; Public/Retail; and Pools, Parking, and Site – each with their own unique challenges, methodologies, and measurable productivities. Duplicate resources in trades like drywall, paint, and roofing were subcontracted independently to cover area-specific scopes of work and reduce labor risks in Colorado’s ultra-tight subcontractor market. Making work areas smaller has kept teams on track for the most part. The redundancy has been advantageous in the areas of roofing and drywall when additional resources were needed to keep up with the schedule.

“Getting an enclosed, dried-in structure was the early objective,” says Sisco. The Mortenson/WELBRO team reached deep into the bag of tricks to keep an army of labor moving forward sequentially across the hotel’s 15 stories of cast-in-place concrete and structural steel and the convention center’s structural steel slab on metal deck frame. Prefabrication was essential to extending efficiency beyond the manpower and the focus was strategic. “We developed a panelized, metal-stud framing and sheathing system that is fifteen-feet wide and two-stories tall,” continues Sisco. “We fabricated complete panel sections on the ground, stored them onsite, and then flew them into place with tower cranes.”

The prefabricated panel system was the first step in allowing Mortenson/WELBRO to take the building’s enclosure off of the critical path. The second was building a temporary roof above the seventh floor of the hotel. This allowed interior mechanical, electrical, framing and finish trades to begin working in dry conditions below the seventh floor while the exterior above level seven continued to climb exposed on until the real roof could be placed.

“Opening up the lower levels to the trades faster greatly increased the workflow continuity as they moved from bottom to top,” finishes Sisco with quiet satisfaction. “Everyone here is putting their best foot forward, and it’s evident in everyone you pass. Their eyes are as big as saucers looking at what we’re building. Every day it is incredible, even to me.”