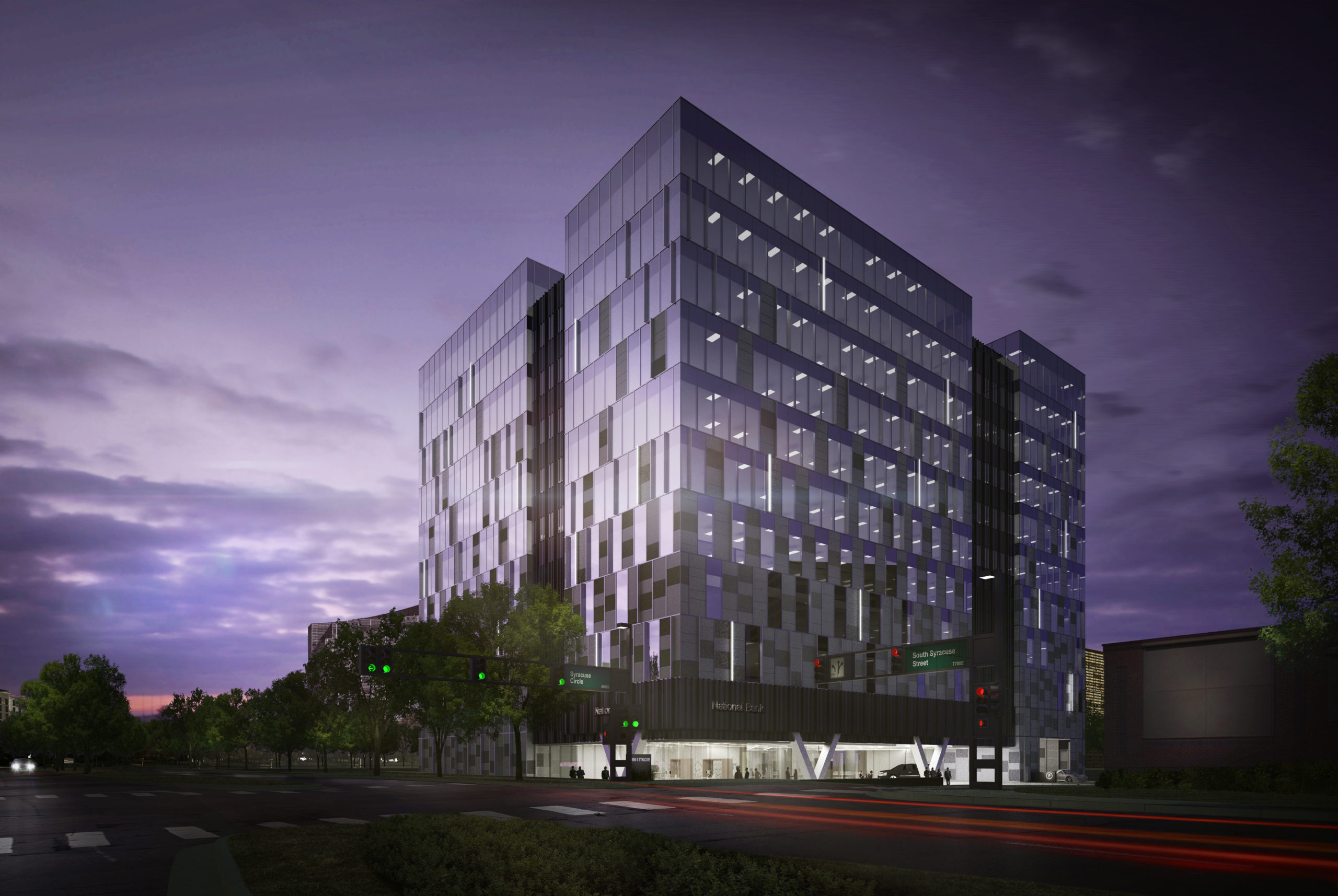 By admin in Architecture, Writing

“Architecture is the triumph of human imagination over materials, methods, and men.” – Frank Lloyd Wright

The combination of exceptional design and premium quality always emanates a certain sense of luster that’s hard to deny and easy to appreciate. In 2018, 50 Fifty, a new 185,000 SF office building joined the DTC skyline hoping to establish itself as a premier property among the area’s abundant competition. Conceived as a 12-story office tower about a block from I-25 and Belleview, building’s name is a clever double entendre. The street address also eludes to the functional dichotomy of six stories of parking capped by six floors of Class AAA office space skinned in an unusual mixture of shimmering glass and speckled granite. Two additional levels of parking reside below-grade; city/mountain views and plentiful access to daylight are accentuated across more than just four faces of 50 Fifty.

“Great architecture is an investment, a worthy one indeed,” says Michael Komppa, president of Corum Real Estate Group. Komppa’s 32 years of experience with Corum have been about putting together commercial development investments that turn a profit by carefully managing the process to create value well in excess of costs. The firm’s portfolio includes more than three million square feet of office space, five thousand apartments and five million square feet of industrial properties in both Colorado and Chicago. Komppa, however, doesn’t mind admitting the thrill of developing speculative office buildings is his favorite part of the job. “50 Fifty, in particular, offered a high-visibility opportunity to express a strong sense of style, and to produce a completed building with a value significantly greater than the sum of the costs.”

Expecting the investment to deliver substantially more than merely leasable office space in a desirable location, Corum hoped to set course for something special and took a bold tack in choosing their architects. Enter Clutch Design Studio, a young Denver design practice ambitious to create the incredible and whose largest-completed commission is the one you are reading about right now.

“We’re proud to share 50 Fifty as the studio’s largest-completed commission to date,” says principal Robin Ault, who previously spent 18 years working at Fentress with Denver starchitect Curt Fentress. There he worked on everything from airports and offices to laboratories and academic buildings. Ault ultimately rose to the Associate Principal level while learning a great deal under Curt’s tutelage before embarking on establishing his own legacy in 2013. “The design brief was direct,” continues Ault. “Corum asked for a product that feels extraordinary at an affordable cost. Our job is to translate that into a market-ready solution that joins its surrounding with a sense of prestige.”

Asked what 50 Fifty adds to DTC, an edge-of-urban and edge-of-innovation office park more than 40 years in the making, Ault smiles and nods confidently before answering.

“Where land is more plentiful, suburban office buildings are typically supported by detached parking structures or surface lots,” Ault says. “We’ve seamlessly integrated the parking structure within the frame of the building envelope. Externally both office and parking components read as a single-profile without distinction.” This integrated envelope strategy is common in denser urban areas where below-grade parking structures often go down several stories in deeper, high-rise foundations. Ault believes 50 Fifty will be the first such property within DTC. The building’s dynamic exterior combines curtain wall glazing covered with a high-performance, low-E coating selected specifically for its level of reflectivity and hand-selected sierra white granite from a quarry outside of Fresno, California.

Inspired by nautical nuances, looking at 50 Fifty from a distance, a pixelated pattern emerges to reveal a spray of sea foam lapping against the bow of a yacht cutting across the deep blue wild of open ocean. To add contrast, depth, and dimension, raised aluminum caps spaced strategically across surfaces provide shade and cast ever-changing shadows as the sun traverses the sky. Select fins with integrated LED illumination will add sparkle and response to the building at night. A line of black metal paneling skims the edge of an internally illuminated cabin in the form of a transparent porte-cochère, tucked beneath a series of elegant v-shaped structural members. The exterior’s subtle suggestion is further developed within, as interior treatments represent slightly more deliberate translations of a refined sailing experience.

Merging the parking and office profiles into a single envelope required extending the office floorplates beyond the preferred 45-foot lease span to match the wider dimensions required by vehicular movements on garage levels. This was a challenge the Clutch team quickly turned into an opportunity.

“45-feet is about as far as natural light can penetrate into a building before spaces become dark and kind of lifeless,” says Ault. To account for the additional floorplate widths on the garage levels, the six floors of office space feature dual 20’ x 30’ open air lightwells joining lavatories on each floor and elevator cores as the tower’s spine. “The lightwells allow for the natural animation of interstitial spaces deep within the floorplates, daylighting restroom banks and core-facing spaces on every floor.”

The challenge of assembling the design was awarded to Hensel Phelps, a firm that began in Greeley, Colorado in 1937 and has since grown to become a national leader in commercial construction. Project Manager, Thomas Dooley, who has been with Hensel Phelps for 18 years enjoys the physicality and mental agility required to assemble complicated structures like 50 Fifty.

“Best-value decision making required engaging specialized subcontractors to pre-think the building envelope,” says Dooley. Curtain wall engineering, manufacturer, and installation subcontractor Harmon was brought in during the preconstruction process to help develop a specialized clip system capable of supporting both glazed and granite panels equally. Five unique granite panel patterns were developed so when interspersed among glazing, the panels read as harmonious yet distinct rather than static and redundant. Mechanical and electrical integration were also early action items. Hensel Phelps engaged Mtech Mechanical and Hunt Electric in a design-build capacity to help develop holistic solutions to the constructability challenge posed by the unusual dual-surface curtain-wall.

“Countless hours were invested during preconstruction in planning the configuration and assembly of this exterior skin,” says Dooley. “Five different panel types; two different floor-to-floor heights with sloping elevations on the garage levels; making it all align correctly on the outside; and work functionally on the inside has all presented a lot of fun challenges to figure out. In a lot of ways, this is going to be a landmark project.”

As 50 Fifty joins the DTC office market, Komppa, Ault, and Dooley each take special pride in what they have developed together as a team. From the visionary engagement of an emerging design practice and the practical wisdom of entrusting the execution to an established industry giant, with the launch of 50 Fifty, Corum Real Estate Group establishes elevated expectations for exceptional office space in suburban markets.

About the Author:
Sean O’Keefe writes architecture and construction stories and content based on 20 years of experience and a keen interest in the people who make projects happen.